OMG Batman is a meta… Kat goes on a rant on how everyone says that Batman is the best super hero because he has no super powers (other than he’s super rich, doesn’t make him a hero), and now….. in the Suicide Squad, he is classified as a meta due to his exposure to Nth metal.  He is classified as such from all of our favourite super bitch Amanda Waller.

BBC has announced that the new doctor is (drum roll please) Jodi Whitaker and Butt Hurt Nerd Boys (BHNB)everywhere lost their collective shit.  The Doctor can’t have a vagina.  I’m sorry in your real world where time traveling space aliens exist there has never been a female doctor.  But guess what there has been female doctors for years.  But as we discussed in the last episode, even when it comes to space aliens, it is important for people to find themselves.  Not all women want to be swept off by a madman in a box, some want to be the MadWoman.  They don’t want to cosplay the companion,  or the gender bent version of the doctor (they still will) but they want to be the doctor.  Now with Giant Hoodie.

Now I will give the writing for the past Doctor was kind of heavy handed with the “hints” that the Doctor will be a woman soon.  Bill’s writing was great.  But the same way many newb Whovian’s stated that Peter Capaldi is not their doctor because he wasn’t cute and goofy like Matt or sexy like David;  that is the same as the BHNB (butt hurt nerd boys) now saying that Jodi is not their doctor, and they will boycott Doctor Who.   For those who don’t know the incarnations and regenerations. 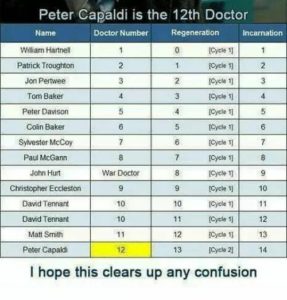 Start the discussion at forum.geektherapy.com